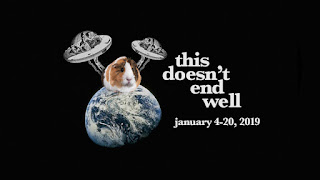 About the show:
A mix of dramatic and comic works about misfortune, these plays have gained national and international renown for inspiring rejection letters from many of the most prestigious 10-minute play competitions in the world. All seven of the seven-and-a-half plays that make up the evening have been rejected by at least one theatrical company. Most have been turned down by several. These scripts have inspired such phrases as “Thank you for participating.” And “It was a very tough decision, but...”

Now, for the first time, South Stream Productions is bringing these plays together in one program for you. Building on the ethos of “buy local,” this is locally written, locally produced, and locally crafted artisanal theatre for the hipster age. Even if it isn't that good, you can be secure in the knowledge that fossil fuels were not wasted shipping in scripts or cast members from far flung places. This is theatre for you.

The Cast (in alphabetical order):

Production photos can be found here.