Thank You for Taking Care of Us.

Ok, so this is a little later than it usually is. Due to my work schedule and the fact that I was literally on a plane to NYC three days after we closed, I didn't get to it right away.

But the point of this post is to say thank you.  Thank you to everyone who put so much into this show.

Before I get to the specific thank yous, I want to say thank you to our kickstarter supporters, and particularly for those people (and there were many this year) who gave a bit extra. We had more people than usual, many more, give money, either in excess of their ticket price, or just despite knowing that they would not use their tickets at all, just to support the show. Thank you.  The money that we raised that way basically went directly to our artists.  Buying a ticket is great too! We covered our costs with ticket revenue, which is a pretty big accomplishment. The lights, the space, all the little costs of putting a show on, our ticket revenue covered that. But I wanted everyone to know that the extra kickstarter money we raised went directly to our artists. YOU made the difference in our being able to at least recognize their contributions in a financial way. Of course, we can't pay them what they're worth. We couldn't possibly. But artists deserve support. They deserve recognition for their work, even if it's less (much less) than minimum wage. And your donations went to support them. Fully half of the money we were able to distribute to our artists came from your generous donations. Thank you.

We've got plenty more people to thank though!

Big thanks, first of all, to Kevin Ferguson and Cardinal Gibbons High School. We were able to rehearse in their space again this year, and that is probably the single largest contribution to our bottom line. If we had to pay even $10/hr for rehearsal space, we would have lost money. Using that space was huge, really huge, to our bottom line.

Thanks also to other friends in the theatre community. Burning Coal and Cary Players both loaned us lumber and platforms. They literally supported the chairs you sat on. Big thanks also to Manbites Dog. They not only loaned us a number of platforms, but in addition they let us raid their attic for junk. All that junk you saw on stage? 80% of it came from Manbites. It's so great to be part of a theatre community that cooperates on this level. That supports and encourages other productions rather than seeing them as rivals.

A big thanks to Dolly's Vintage. All those bad ass costumes? Dolly's. The only costume we didn't get from Dolly's was John's costume. And really, you don't want to wear that anyway...  Without their support, we would have had to spend loads on costumes to get the same look. Check out there website here and plan a shopping trip.

Thank you to all the people who helped out and volunteered their time to help with load in and strike, including my parents and my sister and (soon) brother-in-law from Atlanta. Dale, Dana, Jessica, Lisa, Richard and everyone on the program. Every set of hands helped.

Thank you to Jeff for his help with carpentry and his technical help with the space. We would not have been able to do it without you.

Thanks to Todd, our carpenter and master planner. Todd has been a key part of our team for each production. He brings skills to our company that John and I, quite frankly, completely lack. I mean, I know which end of a hammer to use but that's about it. He planned our seating arrangement and he and Lisa put in long days to put that together and took it apart.

Thanks to Shu Cao Mo, our Assistant Director. It's amazing what lengths she went to be a part of the production. Thanks for asking the questions that needed to be asked.

Thanks to Zachary Corsa for our sound design. All that atmospheric stuff, the underscoring the rise and fall between scenes, all Zach's work. Jay wanted to be sure you were part of the team for this show and I see why. Check out more of Zach's music at the website for his band "Lost Trail."

Thanks to JaMeeka Holloway-Burrell, our Stage Manager extraordinaire. Stage manager is really the hardest job in theatre. You have to be at ALL the rehearsals and ALL the performances, but you don't get the applause. It takes not just hard work, but concentration, organization, and patience, LOTS of patience to deal with actors. We were so lucky to get to work with JaMeeka. Thank you.

Thanks to Ryan Brock. Again. Last year he was "Leslie" in Seascape. This year he was Mick. I often talk about Ryan behind his back with other actors. And everyone says the same thing: he's fantastic. Because he is. I'd venture to say there is no one in the triangle that most actors would rather have as a scene partner than Ryan. Not only is he creative and intuitive on stage, but he is a rock. Prepared, confident, comfortable and present. We were very lucky to get to work with him again. Thank you.

Thanks, big thanks, HUGE thanks to the Jaybird. It is not an exaggeration to say we would not have done this show without him. It's the truth. Many months ago (I think in May?) I was talking to Jaybird about something else, and he happened to ask what we were doing next. I told him we were considering The Caretaker, but I needed a director who knew what the hell the show was about because I had no clue. When Jaybird said he might direct it, I jumped at the chance. It was an easy decision. Honestly John and I were flattered that Jay would even consider directing us. Without his eye, his judgement, and his vision we would not have even attempted a script this ambitious. And the set? The look? the idea of staging it in the back stage area of Common Ground?  All his idea. Even the lighting. Totally Jaybird. Thank you for your guidance, your creativity, and your faith in us.

Finally, thanks to my partner and co-conspirator John. What can I say? We did it again. The work that John put in ... I mean his part, was a MAMMOTH part. I don't think he knew what he was getting into when he agreed to this. He carried that play. And the character of Davies is so very unlike John. It really was a remarkable transformation, and a remarkable performance. I should also point out that John balances the box office. He makes the spreadsheets and does the book keeping. When I got home I slept. When John got home, he had to balance the box office. I'm so lucky to work with John on each of our shows. He compliments my skill set and he's a remarkable performer.

Well, that's it. We are dark for another year (maybe... ). We are off to other projects. Ryan is in The Pride with Mortall Coile. John is understudying for Playmaker's performance of An Enemy of the People. Jaybird is directing Paris 76 for Manbites Dog. JaMeeka just finished as SM for Hands Up at Common Ground. And me? I'm busy visiting campuses right now. If things go well, I may be out of the area next fall. But then again, if things go well, I might still be here. Because things went pretty well this past year. I think The Caretaker was our most artistically successful production to date. I am so pleased and so proud of what we were able to share with our audience this year. If I'm still here next year, it will be a great challenge to try to top that.

Thank you for helping us create and share The Caretaker with you. See you soon. 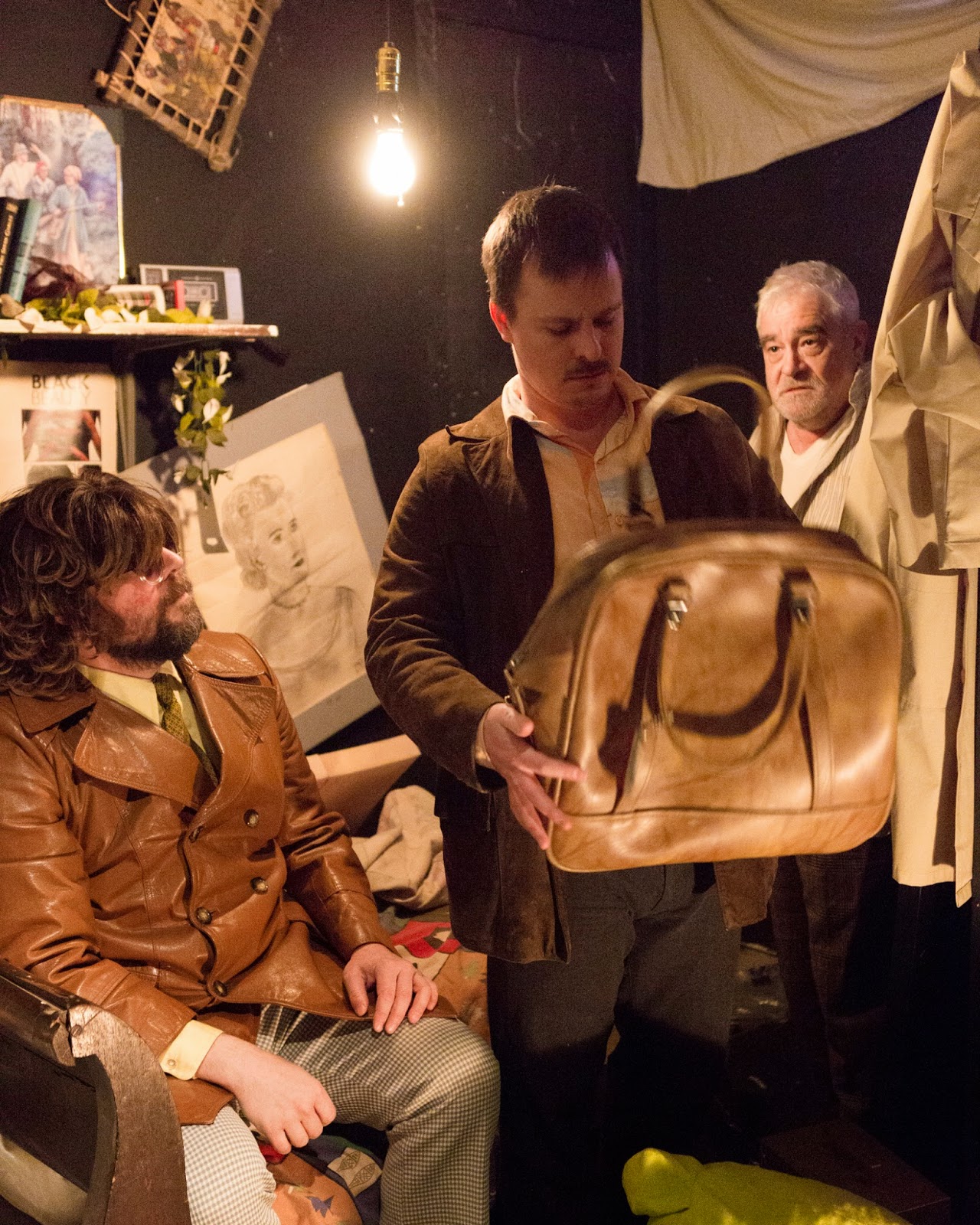 Posted by Unknown at 8:24 AM No comments: