That's it. It's over. The flats are back in the warehouse, the costumes are back in storage, and I have a trunk full of sand (anyone want play sand?).

Hughie was a great adventure, a great challenge, and a production I am very proud of. But of course, I did not do it. We did it. A lot of people helped out to make this happen, and I want to say thank you to all of them.

First - Thanks, as always to Kevin Ferguson and Cardinal Gibbons High School. We were able to rehearse in their space, and, as always, it was probably the single biggest contribution to the production we received. Two weeks of free rehearsal space is such a blessing.

Second, a huge thank you to Cary Players. Again they let us borrow flats and use their warehouse to paint them. Such a big help!

Theatre in the Park also deserves a thank you. They let us borrow several lamps, plus that big mailbox. And Jeff snagged that desk for us (which we got from Mortal Coile's production of Master Harold). He stored it for us (and painted it black).

Big thanks also to NCSU theatre department for loaning us the costumes. They looked great, and there's no way we would have been able to source anything nearly as good without your help.

Ok. Take a minute and look at this list of thank-yous so far. Four theatres in the area gave us major assistance to put this show up. That's cooperation. That's a theatre community.

Thanks also to the people that helped us out with load in and out. Chris Hayworth and Matt Spitler were a huge help, and veteran theatre volunteer Jamie Marlowe also pitched in for our load in, helping us rig the lights. We also got help from Ami Kirk-Jones with painting the set, and Kieth Bugner was a fill-in stage manager for a day. Olivia Griego coordinated our front-of-house volunteers. Big thanks to all of you.

And then, of course, there's the production team.

TODD HOUSEKNECHT - our technical designer, and who I forgot(!!) the first time I drafted this. Wow. Todd has been a key part of the team for every single production of South Stream. He was our technical director. Making sure we had the flats, and jacks, making sure the walls were properly supported. and supervising load in. I would not have been able to do any South Stream show without him. Thanks so much Todd!

Mia Carson our Lighting Designer (who is in Boone for the summer running their show) helped set the mood for the show. So did Will Mikes, our Sound Designer. Sound and lights create the atmosphere for a show. Often under appreciated, sometimes not even consciously noticed, but there. Thanks to both of you.

Laura Parker designed the costumes. She selected our outfits and made sure they fit the character, the period, and the actors of course. She even made the vests specifically for the show. Costumes are a huge part of creating the character in a piece. I often feel like the character can't be fully there until you have the clothes. Until you're literally walking in that characters shoes (and pants) you don't know who they are. Thank you Laura for everything you did for the show.

Huge thanks to Jennifer Sanderson, who designed the set AND was responsible for the awesome graphics. That cool neon sign? Her. Those cool pics of me and David? Her. The look of the set, the paint on the flats, the damn brass fixtures on the mailbox and the green tassels on the keys? Her. I meant to get a post up about the set, and how it tied into the story. Maybe soon. But thank you Jenn!

Thanks to my producing partner John Honeycutt. John didn't have a huge hand in the show, but he secured the rights, and he was there providing support when he could. It's always great to have someone else who believes in the show and helps on the production end. The reason John wasn't a bigger part of the show? He's in Ragtime with Justice Theatre Project. Go get a ticket to their show!

Huge thank you to our amazing stage manager Elaine Petrone. I always say, SM'ing is the hardest job in theatre. You have to be at every rehearsal just like the director, but you ALSO have to be at every performance, and you don't get any creative control. Well, put an asterisk on that one, because I think a good SM knows when and how to offer creative suggestions. They shouldn't try to direct the show, but the absolutely should be part of the creative team, not just the principle organizer. Elaine did all that and more. We were so, so lucky to get her and it was a pleasure to work with someone so skilled and accomplished.

Thanks, of course, to Andy, our director. Andy has directed three of the five South Stream shows. He's not only fun to work with, he has a great eye and a strong and confident voice in the process. I love working with him and spending time with him, and for a two person show, both are important. He is next directing Tuesdays with Morrie at Temple. (Also with John)

Finally, huge thank you to David Klionsky. It's absolutely true that when I first brought the idea of switching roles to Andy, you were one of the first names we thought of, and we both instantly agreed you'd be great in both parts. And we weren't wrong. I was so lucky to have you in the rehearsal process. It was such a pleasure to work with you on both Erie and Night Clerk. Thank you for agreeing to take this adventure with me. It was incredibly rewarding and educational as an actor, and damn fun. Thanks for being the other half of this crazy experiment.

Well, that's it for now. Erie and Charlie and Hughie are gone but not forgotten. Thanks to everyone who made the show possible, and thank you to everyone who came to the share the show with us. We hope you enjoyed it.

Until next time,
Brook

Posted by Unknown at 5:25 PM No comments:

HUGHIE by Eugene O'Neill is open!

IMPORTANT UPDATE!
Our last show is today, June 5, at 3PM. Hillsborough Road will be closed until 5PM. Roads to the north of the theatre (Wade Ave/Cameron Village) should be fine. Please plan accordingly!  Here's a partial map of the road closures: 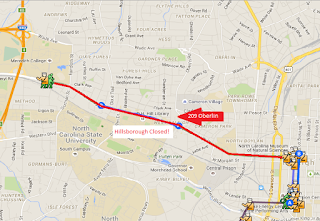 Hughie opens tonight, May 27! The actors have done their work, the show looks great, it sounds great, and our invited audience last night had a great time. Here's all the information you need to join us for a great time of your own.

How do I get tickets?
Tickets are available through the Sonorous Road Box Office. CLICK HERE TO GET TICKETS.

Where is the theatre?
Sonorous Road Productions
209 Oberlin Street, Raleigh
(Very close to the NCSU bell tower and Cameron Village).

How long is it?
The show runs a bit less than an hour, depending on how fast we talk. ;-)

What's all that "as Erie" stuff?
You missed that? The show has two characters, Erie Smith, a small time gangster and "teller of tales" and Night Clerk. Brook North and David Klionsky will be alternating roles during the production. 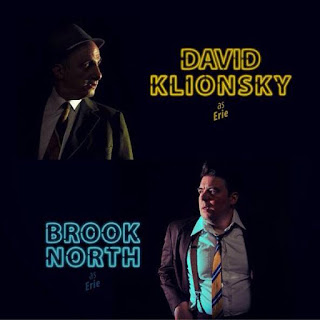 Is there a discount if I want to see it twice?
YES! After the show, keep your program. When you come back, simply present the program at the desk and we'll sell you admission for only $5 more!  It's only $20 to see it "both ways." See it twice, and compare the performance. Discuss the different interpretations of the characters. Vote for who is best! (no not really)

What is the show about?
It's 3:00 in the morning, and Erie Smith is looking for someone to talk to. He needs an audience. The only one he can find is someone who can't get away: the night clerk at his residential hotel.

In a larger sense, the play is about loneliness and the need for human connection in a disconnected world. Seems pretty relevant today, no?

Is the show appropriate for children?
I don't know. The language is mild by today's standards. There's some comments about sex and tramps, but it's all talk about "makin dolls" and that sort of thing.  But it probably isn't something most kids would enjoy.

That's about it. GET YOUR TICKETS TODAY!

Who Is Better? (Nobody)


The reviews are in, and they are... decidedly mixed. CVNC... didn't like me. Byron at the Indy liked David, ..  and also didn't like me.  I have it on good authority that at least some of the folks at Triangle A&E did like me (Kurt posted a review on my facebook page, though as of noon Wednesday they have not managed to publish a linkable review [EDIT - it's up! Read it here.]).

So why link to "bad" reviews? Why even acknowledge them? Well, a few reasons, but first I should note I've written about reviews before here. As an actor you can't let them in (good or bad). But as a producer, I don't have the luxury of not reading them. Normally, I'd be linking to good reviews (previously we have had exactly one negative review of a South Stream Production) but I'm ok with linking to bad reviews too, in context. Let me explain.

First of all, I would rather have people say bad things about me than say nothing at all. Partly it's the "any publicity is good publicity" but more importantly, I feel what I do is worth artistic consideration. I would rather spark an argument or discussion, even personal criticism, than not have any reaction at all.

And part of this process was about creating something interesting to talk about. David and I made a very conscious effort to develop our own truth with each character. We didn't try to avoid taking ideas from each other, but we also did not try to create a unified interpretation. Even as we agree about most points of the character, we found different expressions of that journey. That's what's been so exciting about this process. I feel that we achieved something really special. Two very different interpretations of the same character, each effective and honest, but each different. Is there a "better" performance? I honestly don't think so.

Of course, people being what they are, tastes vary, and comparison is, I suppose, inevitable. And I'm fine with that. They are very different shows, and of course, people will like or dislike them as they wish. Am I disappointed that people (and despite what some actors will tell you, reviewers are people) came to the show and did not enjoy my performance? Sure. But would I change that performance? Hell no. I absolutely gave the performance I intended.

So is my show any good? I think so. I can only present what I feel is the truth of the character. And David will be out there doing the same. This weekend we run five shows:

Come see the shows, and decide for yourself.